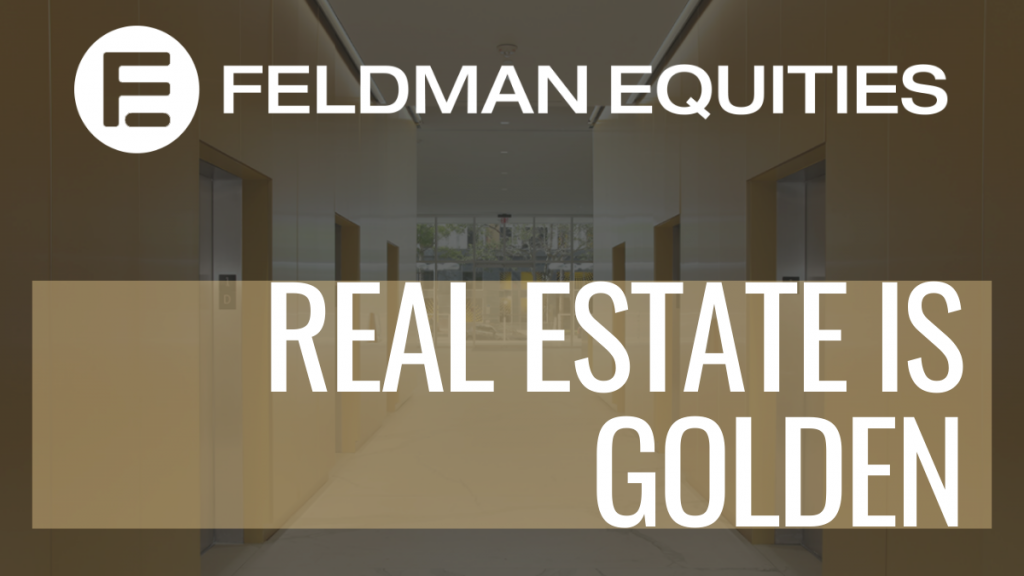 It’s a common refrain, and yet more fabulous than truth: Gold has an abiding and near mystic intrinsic value, and thus is the, well, gold standard for inflation protection.

But the historical record shows well-placed real estate, particularly large portfolios, are a better hedge against inflation than gold. Depending on tax codes, property is advantaged in other regards as well.

Indeed, it is well-positioned property that has the intrinsic value: People globally are urbanizing, and residents, employees, and consumers need shelter for work, housing, shopping and entertainment. Ergo, shelter in urban area has intrinsic value. People will pay money to be protected from the elements, whether in 110-degree Phoenix or freezing New York City.

Gold, on the other hand has almost no intrinsic value, and is only worth what people say it is worth on any particular day. More on that topic later, but for now let us ponder an inflation-adjusted chart on gold values: 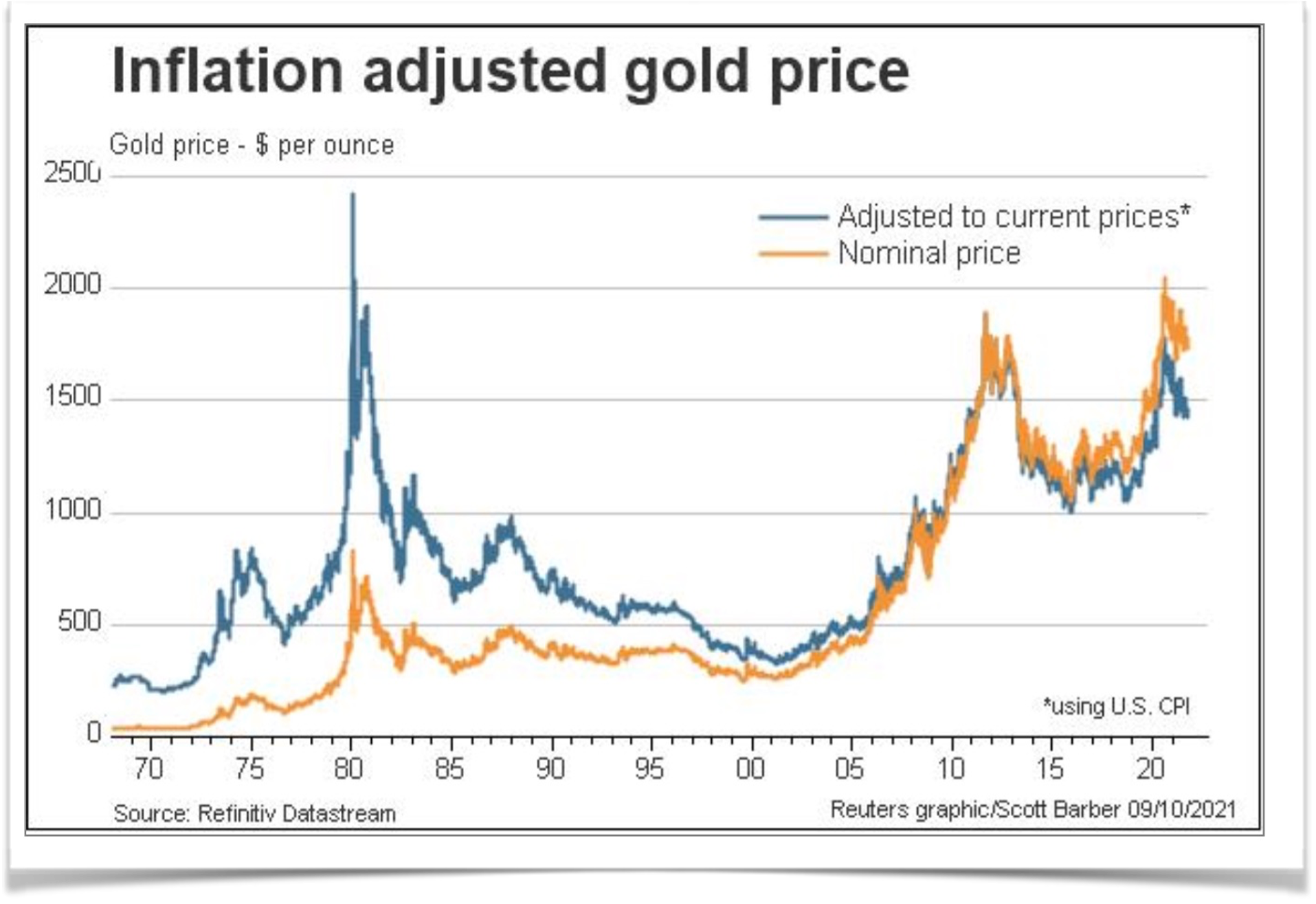 There is little doubt that gold performed well in an historically brief period—specifically, the 10 years after President Richard Nixon took the US completely off the gold standard in 1971, which coincided with a decade of near double-digit inflation. In such an unusual environment, gold prices struck a real zenith in 1980 that has not been eclipsed in four decades since. An investor could harbor suspicions that gold has been resting on the deep impressions made in that 10-year period, particularly to an older generation.

And to be fair, for those with timing, buying gold in the 1990s has worked out well enough.

Today gold is trading below values of 2011. Why does gold vacillate so much? Again, more on that later.

To be sure, property is a not a commodity, such as gold. Each piece of real estate is unique, with varying prospects for reward and risk, let alone additional complications rendered by tax codes (although those considerations are usually advantageous). From the get-go, comparing property to gold has challenges. This inherent feature of real estate is called heterogeneity – no two parcels are the same.

Nevertheless, as a proxy for property prices, let’s take a look at the oldest REIT ETF in the US, the iShares U.S. Real Estate ETF (IYR), founded in 2000: 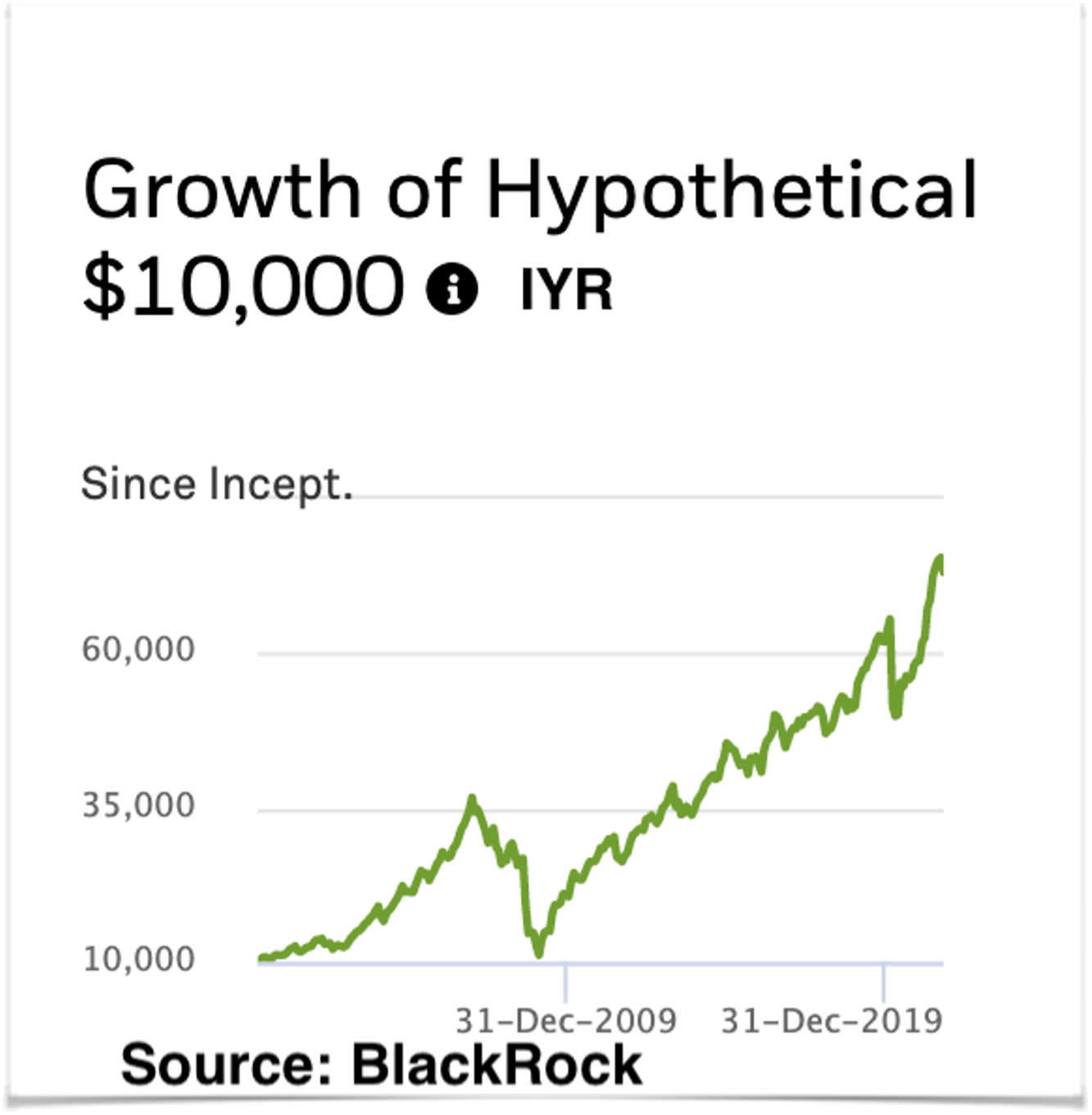 The general-purpose iShares U.S. Real Estate ETF (IYR) not only outperformed gold in the 2000-2020 period, the ETF was much steadier in value, with only one large slump during the Great Recession of 2008-9.

Nor was the iShares U.S. Real Estate ETF (IYR) cherry-picked. Rather, it slightly underperformed peer ETFs, according to BlackRock.

Here is another metric of US commercial property values, from the highly regarded real-estate advisory service Green Street Advisors, and it shows real estate values have tripled in the period, and also rise steadily barring major disruptions. 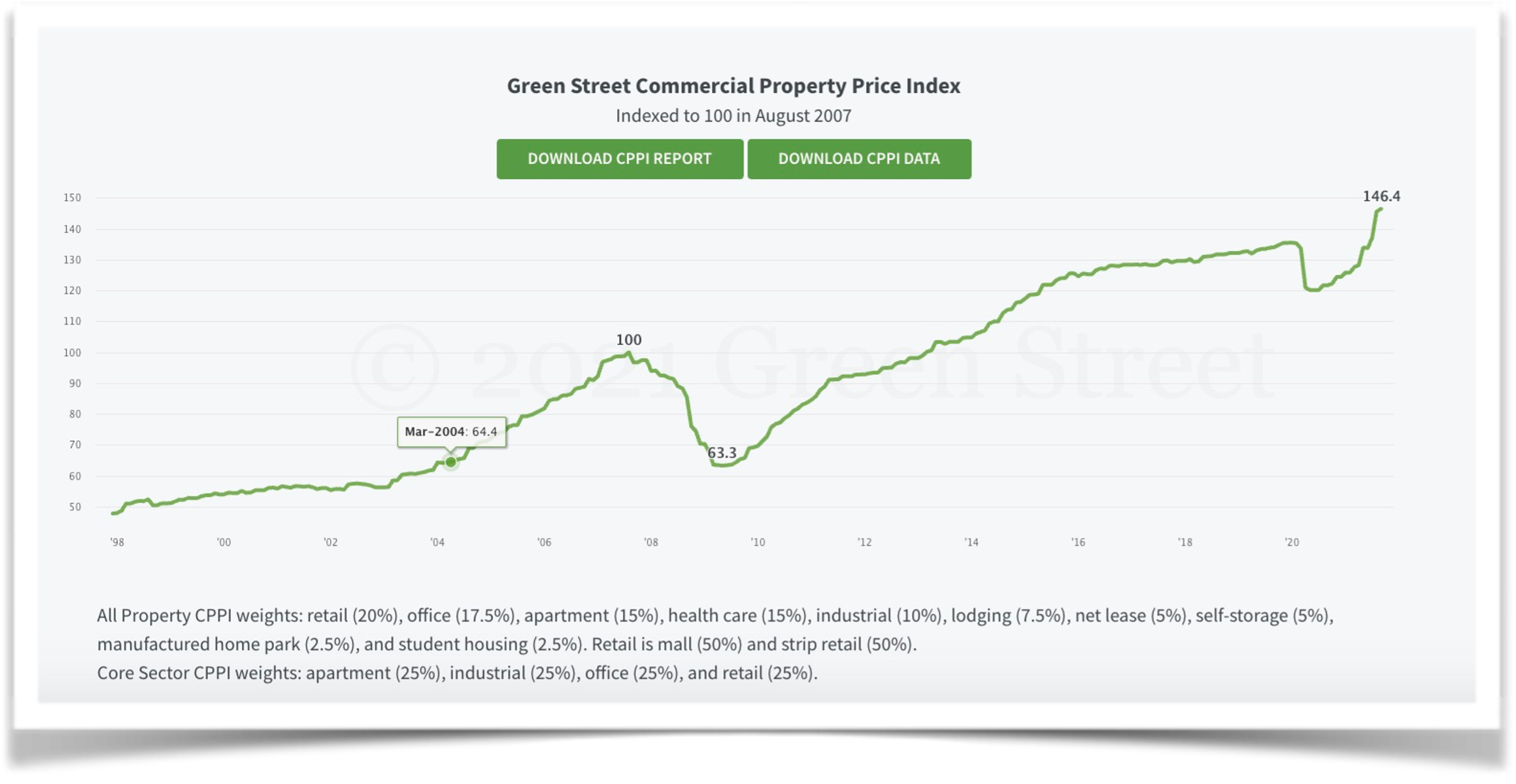 Gold, in contrast to portfolios of property, tends to undulate—and that can be troublesome in terms of liquidity. If an investor has to sell at some point, they will generally be in good shape with property, but it could be up or down with gold. The tradeoff of course is that gold is more liquid, whereas real estate is expensive and time consuming to sell.

So many otherwise reasonable people seem to have an abiding faith in gold—indeed, the very same sorts of people that are sensibly inclined towards limiting federal budget deficits or expansionism by the Federal Reserve—that it is tempting to also rhapsodize about gold.

But for all of its mystique, gold has no intrinsic value, as seen by the graph below: 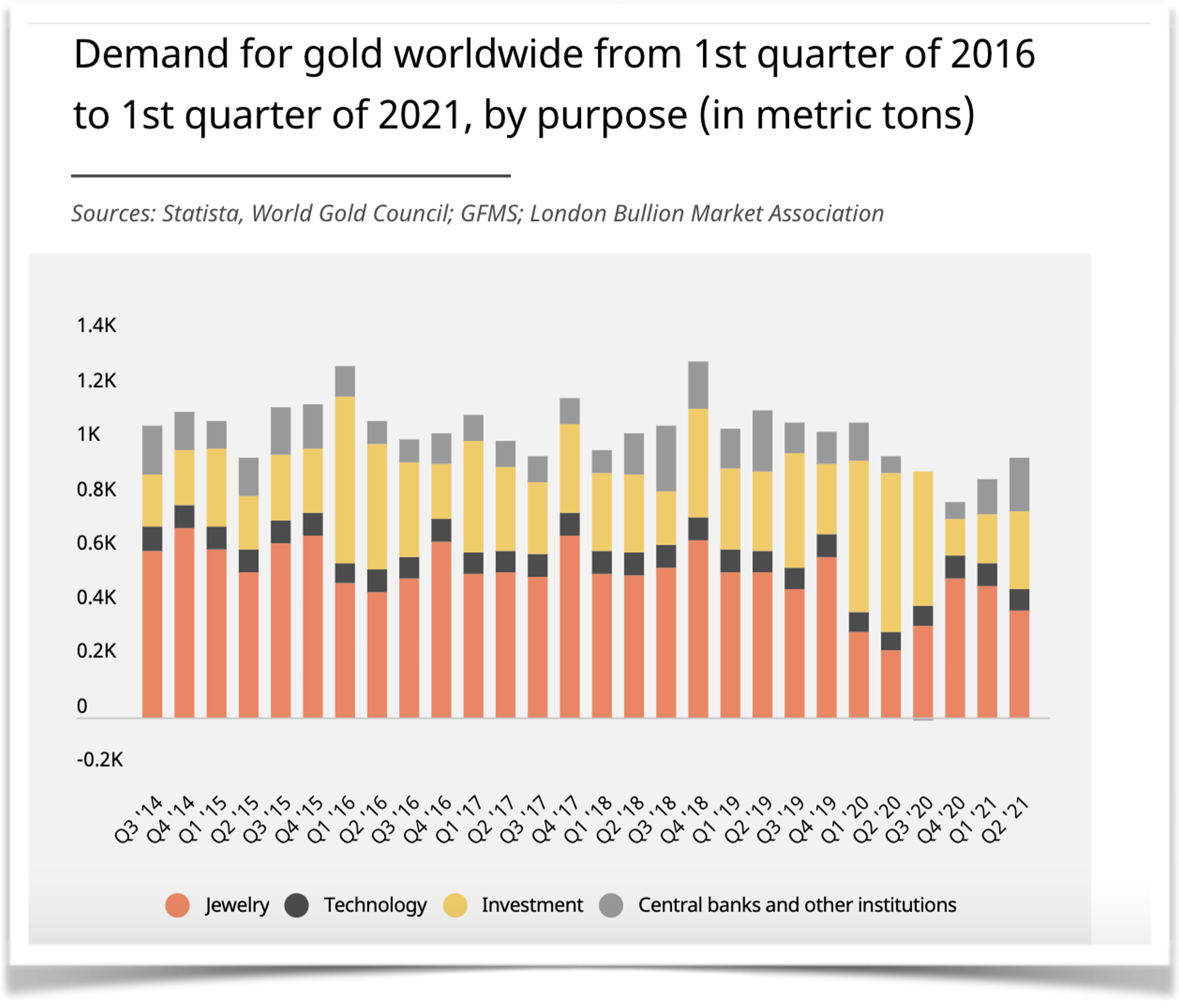 Only a small sliver of gold demand is generated by industry, that is anchored to a real intrinsic need. The lion’s share is consumed by jewelry buyers in India and China, by investors, and by central banks. Yes, central banks in recent years have played a role in propping up gold prices and are larger consumers of gold than industry.

In this regard, gold is much like an Andy Warhol painting, a collectible car, a rare antique, dinosaur bones or other precious gems and metals with little industrial use. The value of such objects is what people want to pay.

Due to its unpredictability, gold may belong in the investor’s portfolio as a ballast.

But for those who want long-run performance and protection against inflation, well-placed real estate is the better option.