The Impact of Fed Tapering on Commercial Real Estate 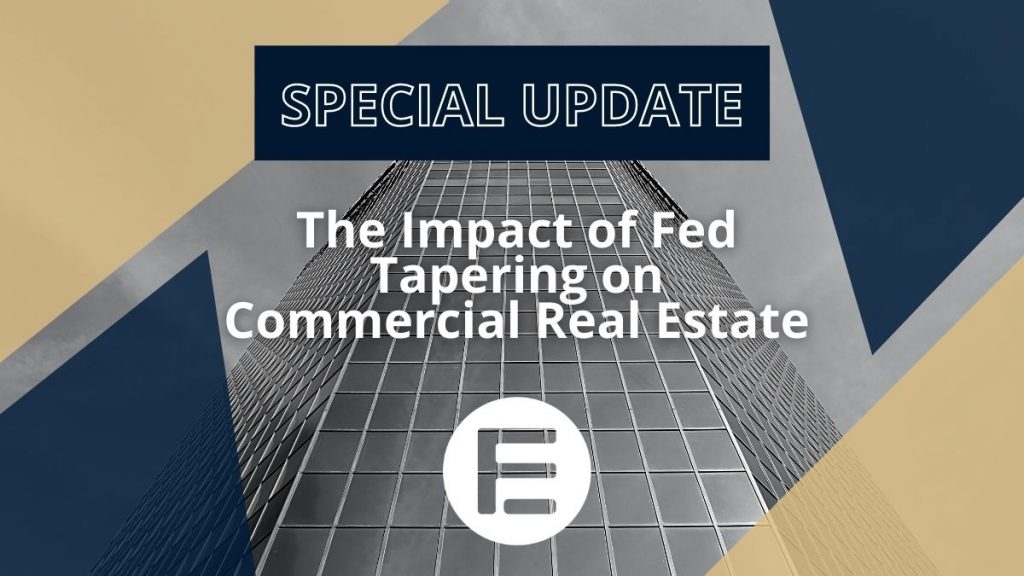 It’s no secret that the Fed is preparing to taper its asset purchases which have been at record highs to mitigate the economic damage caused by the COVID-19 pandemic. The Fed has been so committed to stabilizing the economy that it has been investing upwards of $120 billion every month in government-backed bonds. However, as policymakers begin enacting regulations that steer the economy back to a more “normal” method of operation, these investments are likely to taper in the coming months. Obviously, any change in the government-backed securities market impacts investors, so it’s important to understand what the Fed’s decision to taper means for your commercial real estate investments.

Tapering refers to a policy of paring back purchases of bonds under the Fed’s Open Market Operations. These alterations in investment strategy aren’t made on a whim. Instead, policymakers set predetermined intervals at which investments are increased or decreased, generally on a monthly basis. The Fed’s investments in government-backed bonds are expected to decrease monthly until those investments return to pre-pandemic levels. Policymakers met in early November and agreed to begin the tapering process in either mid-November or mid-December.

What Securities Has the Fed Been Investing In?

To help minimize inflation and keep interest rates low, the Fed began investing in government-backed securities in June of 2020, around the time of the peak of the COVID-19 pandemic in the United States. Many of the government-backed securities that the Fed has been investing in have involved real estate, especially large commercial real estate mortgages that were federally insured.

When Will the Tapering End?

Based on the records of the Fed’s September meeting, the tapering process will be a relatively quick one if everything goes according to plan. As we already mentioned, tapering is slated to begin in mid-November or mid-December. However, the process which started in June of 2020 is expected to be completely wound up by the middle of 2022. Realistically, this means that the Fed will either completely halt or at least significantly decrease the amount of government-backed securities that it purchases.

At the time of this writing, the tapering schedule has not been released, so there is no way to know exactly how drastically the monthly decreases in investments will be. However, the impacts on changes in these investments will most certainly be felt by investors and consumers alike.

If the June of 2013 “Taper Tantrum” was any indication, market volatility is likely to increase to a certain degree. The Fed’s decision to taper their bond investments eight years ago resulted in a significant amount of volatility, which left many market sectors feeling the impact. Industry experts indicate that the Fed has taken a much more calculated approach to their purchases in the face of the pandemic, and in turn are expected to minimize the risk associated with the end of the bond-purchasing program. Obviously, no form of monetary policy is completely risk free, but many experts do believe that the final result of this tapering will be minimal volatility, and that the volatility that we experience will be primarily relegated to the stock market.

In addition to volatility within the stock market, it is also expected that mortgage rates will increase once the Fed is no longer investing in government-backed securities. It is worth noting that an increase in mortgage rates has been expected for some time, as the Fed’s response the economic impact of COVID-19 has led to all-time lows in interest rates.

Obviously, those rates were never going to stay as low as they have been, but the tapering of these investments and their inevitable end means that mortgage rates are going to go back to a more normalized level. For real estate investors, this is an important situation to monitor, as it will largely impact the way that they finance their investments. If interest rates go up, investors may be more inclined to pay larger down payments or may consider purchasing an investment property with cash instead of signing up for long-term mortgages with higher interest rates.

Obviously, this change will also impact home buyers and sellers, as higher interest rates generally make it more difficult for potential buyers to get approved for mortgages. Additionally, it limits the amount of money that they will have access to. As things currently stand, the housing market largely favors sellers, as there is an influx of potential buyers who have jumped on these record-low mortgage rates. When those rates increase, the balance of power is likely to shift.

In addition to keeping interest rates low, the Fed’s decision to invest in government-backed bonds sought to stabilize inflation. In a recent meeting, Fed Chair, Jerome Powell said that he believes that higher prices will moderate over time in their own way, but some industry experts are concerned about what they could mean for inflation rates going forward.

An increase in inflation, especially a sudden, drastic one, could lead to the price of many goods and services increasing. As many people are just beginning to get back on their feet financially after the pandemic, this is a particularly alarming possibility.

Many financial experts are applauding the Fed for being more communicative about their tapering plan as compared to the fallout that followed a similar instance in 2013. However, it is important for investors and consumers to understand what the tapering, and the ultimate end of the Fed investing in government-backed bonds means. While there are certainly no guarantees about the impact of this decision, it is important to recognize the potential financial impacts and adjust your personal financial strategies accordingly.