It is a Rare Bear That Visits U.S. Commercial Real Estate 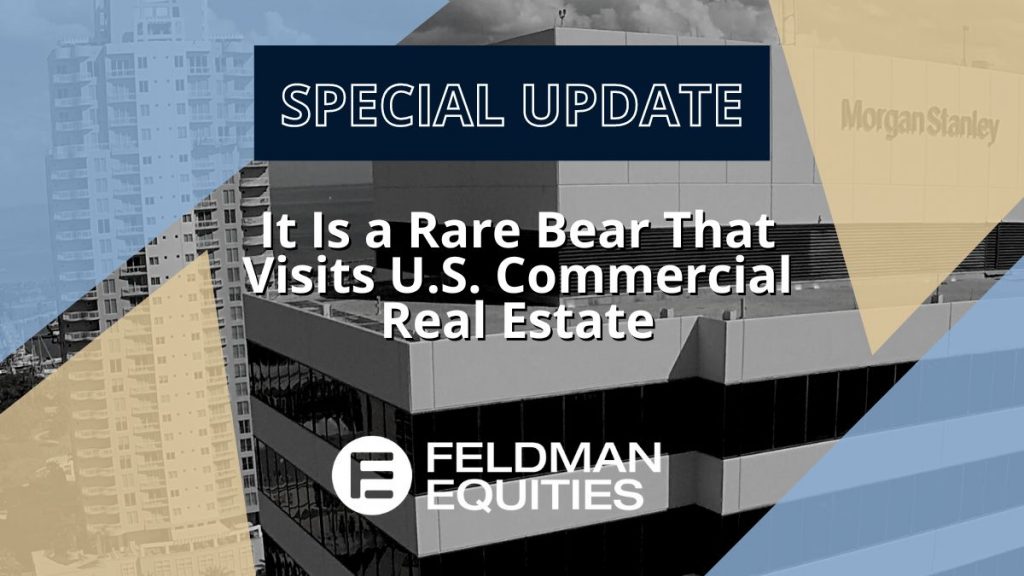 In the last 25 years, there have been only two serious downturns in commercial real estate, and one lasted less than a year.

When people think of “bear markets,” they think of Wall Street, and justifiably so. Since 1928, here have been 26 bear markets, defined as a decline of more than 20% on the S&P 500.

The first serious downturn in the last 25 years in U.S. commercial real estate was triggered by the Global Financial Crisis, 2007 to 2009. By 2013 real estate had made a full recovery, according to the Green Street Commercial Property Price Index.

The second commercial real estate downtown happened during the COVID-19 pandemic, was fleeting, and lasted about a year to full recovery, reports Green Street.

In the last half-century, there have been only three major declines in the FTSE Nareit All-Equity REIT Index (a rough proxy for all US commercial property)—the early 1970s, the late 1990s, and the 2007-2009 Global Financial Crisis.

Do Stock and Real Estate Bear Markets Travel in Pairs?

Not really, as the historical record shows.

Of course, if there is a macroeconomic calamity, such as the Global Financial Crisis, then U.S. property markets may somewhat follow the much more volatile stock market lower.

That said, real estate prices may soften on the margins during turmoil in the stock market. If investors are chary of current market or economic conditions, that may carry over into property markets.

Still, the 50-year track record of the FTSE Nareit All-Equity REIT Index, and the 25-year history of the Green Street index suggest that buying during the rare property downturns, or softness, is a solid investment strategy.

How Deep Was the Last Serious Property Decline?

The Green Street Commercial Property Price Index struck 100 in August of 2007 and declined to a nadir of 63.5 in mid-2009, a 36.5% tumble from apex to abyss—that was the infamous Global Financial Crisis. Full recovery to august property price levels happened by late 2013, and new peaks attained thereafter.

By way of comparison, the S&P 500 fell 46.1% during the Global Financial Crisis, while the Nasdaq Composite fell 50.1%. (Indeed, the Nasdaq Composite lost 75.6% of its value in the famed dot.com meltdown, and recovered nominally in 2015, nearly a decade-and-a-half later.)

Can Investors Profit from a Property Downturn?

Sure, “buy low, sell high” works in every market, but especially in real estate.

Remember, commercial property is considered solid enough that gimlet-eyed banks will lend 65% to 80% of the purchase price, also known as the loan-to-value (LTV) ratio, and sometimes even more.

Property buyers who braved the Global Financial Crisis in 2009 were rewarded with asset values that doubled within six years, even as they collected income.

But Is This Time Different?

Could the 2020s usher in a new, less favorable era for real estate, one of long-term rising interest rates?

To be sure, from 1980 to 2020 the trend was disinflation and generally lower interest rates across the developed world.

This disinflation coincided with capital gluts, perhaps caused by stratified incomes in the West, widespread pensions and mandated insurance plans in the developed world and forced or promoted savings across Asia.

Regardless, “too much money chasing too few deals” has been a refrain in institutional investor markets for a generation.

Broadly speaking, the long run is likely a replay of the past: A lot of capital, globally, looking for secure investments that can generate income.

Real estate is justifiably regarded as a hedge against inflation, as rising prices generally also boost rents, and thus operating income, while debt service can remain fixed or lagging.

The half-century record of U.S. commercial real estate is that downturns are hurdled, and long, moderate rallies are the norm. In other words, real estate is a good place to invest, in an uneasy world.