Is commercial real estate in a bubble? 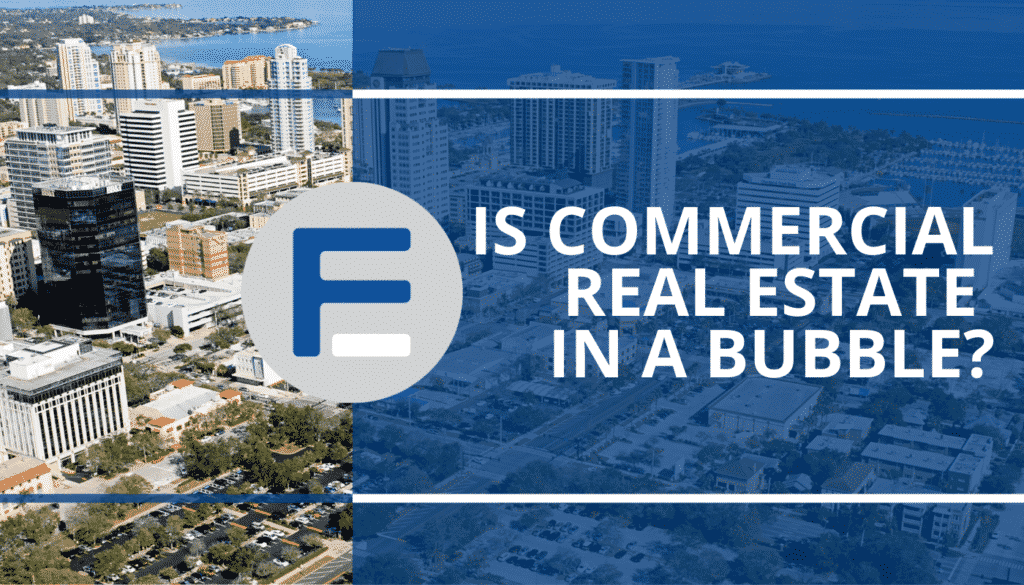 Recent regulatory changes allow accredited investors to have much greater access to real estate investment opportunities like never before.  Now that individual investors can invest in assets like large office buildings, it can be easy for investors to rush into deals without taking due care.  Indeed, so much money is looking for deals, a decent real estate syndication oversubscribes practically the moment it is announced, yet it is important that investors remain cognizant that commercial real estate values will, inevitably, come down.

While smart money moves aggressively, it looks before it leaps. Considering how the frenzy of the last real estate bull market worked out for everyone, it’s worth taking a look at where we are, how we got here, and what’s next for commercial real estate. 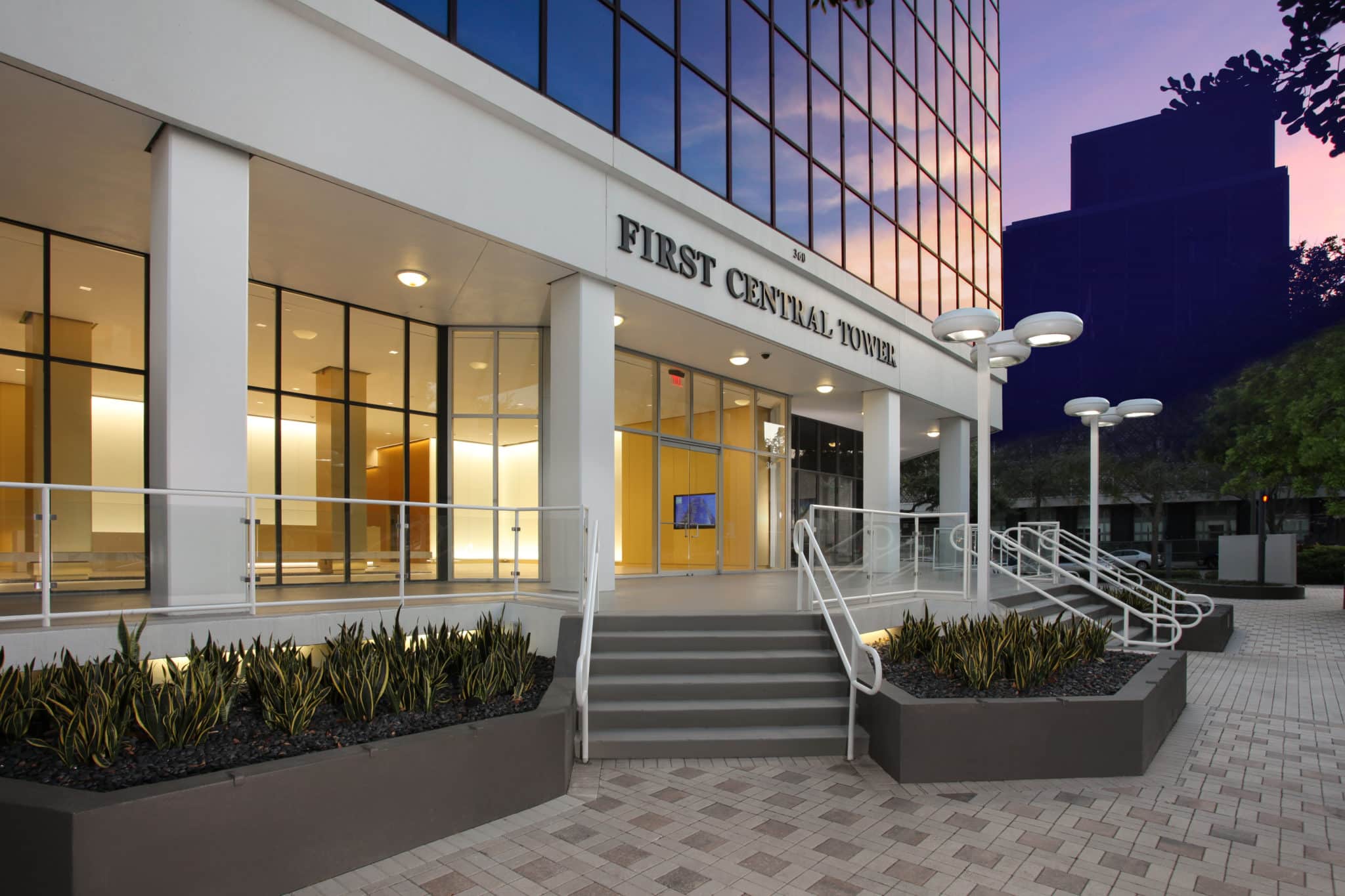 Right now, commercial real estate looks like a can’t-lose proposition; it seems to be on a non-stop winning streak. Billionaires like Jeff Bezos have expressed publicly that real estate is the best place for your money to build long-term wealth (he’s right, of course, but the key phrase here is ‘long term’).

A building boom during the 1980s led to an extreme oversupply and a contraction of building values in the early 1990s. After the crunch, commercial real estate indexes grew steadily throughout the 1990s and early 2000s and then skyrocketed in value between 2004 and 2008. Commercial real estate values grew 66% in four years, a staggering 16.4% year-on-year. Who wouldn’t want to see that in their 401(k)?

When the recession hit in 2008, subprime mortgages on single-family homes were the first to get the red ink. Think The Big Short, with unemployed people getting 100% financing on loans with no credit or income check. The effects cascaded through the financial markets due to the securitization of mortgages, and burdened with toxic mortgage-backed securities, banking giants like Lehman Brothers, Bear Stearns, and Washington Mutual toppled like dominos.

People who sold before the crisis used their cash reserves to buy distressed real estate from others in a period of unprecedented wealth transfer. Investors who jumped on the bandwagon by buying at the top without employing recession resilient investment tactics took a beating.

The return to normalcy began in 2009 and commercial real estate started its steady climb back to pre-recession levels. Between 2009 and 2019, commercial real estate indexes have gone up 111%, which equates to more than twice the value it lost. That’s 11.1% year-over-year for the last ten years, and a healthy 9.13% annually over 15 years. Even including the recession, if you invested in 2004 or 2009, you would likely have doubled your money by now.

Indeed, if you had purchased in 2004 and held on during the downturn, your net operating income (“NOI”) in 2019 would likely justify an attractive mortgage refinance at an incredibly low interest rate. In many cases, the proceeds from such mortgage refinancing have allowed owners to get back all of their equity, or in some cases even a surplus above the amount that they had invested. Interestingly, such surplus mortgage refinancing is not taxable because it is considered a “borrowing” according to the IRS rules.

Are we in a bubble?

With such strong recent growth patterns, some real estate asset classes, like apartment buildings, have become increasingly popular investment vehicles. It was that way before the 2008 crisis, too. As home prices skyrocketed, buyers became increasingly priced out of the market; apartment development, condo conversions, and ground-up condo development went into oversupply nationwide at unsustainable pricing levels.

A “bubble” refers to market conditions where an asset class is substantially overvalued. Prices have shot up, and investors chase those quick gains by pouring their money into that overvalued asset class.

In the last few years we have seen some similarities to the pre-2008 crash in the housing market.   Rising housing prices are being fueled, this time by historically low interest rates. In some local markets, buyers have made substantial profits by flipping houses.  Indeed, a brand-new asset class has emerged powered by institutional capital; single family homes for rent. However, lending standards are not nearly as loose as they were in the pre-2008 period.

Another way that we protect ourselves from recessions is that we employ a small tenant strategy where we avoid leasing to very large tenants.  By leasing to many smaller tenants with a diversity of industry, no one tenant can create a “House of Cards”.  Incidentally, although these smaller tenants may not occupy large spaces, they may in fact have strong credit. For example, many of our buildings in Tampa Bay have branch offices of large investment banks such as UBS, or RBC.

Another strategy that we employ to make our buildings “recession resistant” is to strongly encourage our tenants to enter into long-term leases. In order to accomplish this goal, we offer significant inducements to our tenants in the form of construction upgrades, free rent periods, moving allowances and other incentives. Our strategy of signing up strong credit-worthy tenants with long-term leases keeps our buildings occupied during good times as well as bad times.

That said, we do not see the world through rose tinted glasses; plausible arguments exist for the overvaluation of commercial real estate by less well prepared and unseasoned operators. Three big concerns which are all interrelated are monetary policy, fiscal policy and low cap rates.

Federal monetary policy has a big impact on commercial real estate. As we all know, real estate is sensitive to the interest environment. Interest rates have hovered at historic lows since both before and after the Great Recession. We have recently entered into fixed rate debt in the range of 3.75%. These are the lowest interest rates we have seen in our company’s history.

Compare the current interest rate of 3.75% to the near 20% interest rate that prevailed in 1980. If interest rates were to increase overnight, it is likely that commercial real estate would decline in value because no one could afford to buy them at the same price. The rental income would not have changed, but the loans would have become more expensive, meaning you need a lower loan balance to cover the debt service with the same rental income.  One way that we avoid this risk is by entering into long-term fixed rate debt, whenever possible.

Another Fed monetary policy, by contrast, has no precedent, and has many investors worried. In 2008, the Fed fought the Recession with a program called “Quantitative Easing” (QE). The Fed pumped $3.5 trillion in liquidity into the market over the course of many years—basically printing money for investors, banks, and consumers to spend. Other countries have followed the Fed’s policy but to an even more extreme degree by forcing long-term rates to become negative rates. A recent report indicates that the amount of negative debt worldwide now exceeds $15 trillion.

This policy of extremely low interest rates may have artificially inflated all asset classes, making some portion of the recovery illusory, and has proven resolutely difficult to reverse by successive Fed chairmen since inception.

The United States is currently enjoying 10 years of sustained expansion which has resulted in virtually full employment for all Americans that want a job. Nevertheless, the 2019 fiscal deficit for the United States has reached nearly $1 trillion. Recent projections from the Congressional Budget Office (CBO) indicate continuing budget deficits in the range of $1 trillion per annum over the next 10 years.

Because interest rates have been extremely low in recent years, the total annual interest on the US federal debt is projected to be about $480 billion in 2020. Imagine if interest rates were to return to more normal levels, say 7 or 8%. Over time, the combination of increasing deficits and higher interest rates could cause the annual debt service on the federal debt to exceed the entire federal budget.

Eventually, there is no free lunch and all of this money printing will likely have a significant negative impact on the economy and possibly on interest rates.  Given this threat of runaway interest rates, our strategy is to enter into long-term fixed interest rates whenever possible.

In simplified terms, the lower the cap rate, the pricier property is.

There is some truth that the cap rate of a particular building will be similar to the cap rates prevailing in a particular local market. However, the novice commercial real estate sponsor, particularly in the office market sector, will often oversimplify the idea that cap rates tend to be determined by the prevailing cap rate in a marketplace.

Particularly in multi-tenant, large scale office building investing, it is vitally important to understand that cap rates vary from one building to another based upon the credit worthiness and the length of the lease terms.  In theory, there could be multiple cap rates within a building, which could be applied on a lease by lease basis within a building.

For example, a cap rate of 3.75% or less may be justified with respect to the net operating income of 60% of the building, if that 60% portion is leased to a single tenant like Google or the Union Bank of Switzerland (UBS), with a non-cancelable lease term of 25 years.

A cap rate of 7% or more may be justified with respect to the remaining NOI for 40% of the building, if that 50% portion is leased to a weaker tenant that only had two years remaining on its lease. Only the aggregate of relative strengths and weaknesses of the multitude of ‘cap rates’ within a building can properly indicate that building’s true value – and investment opportunity. 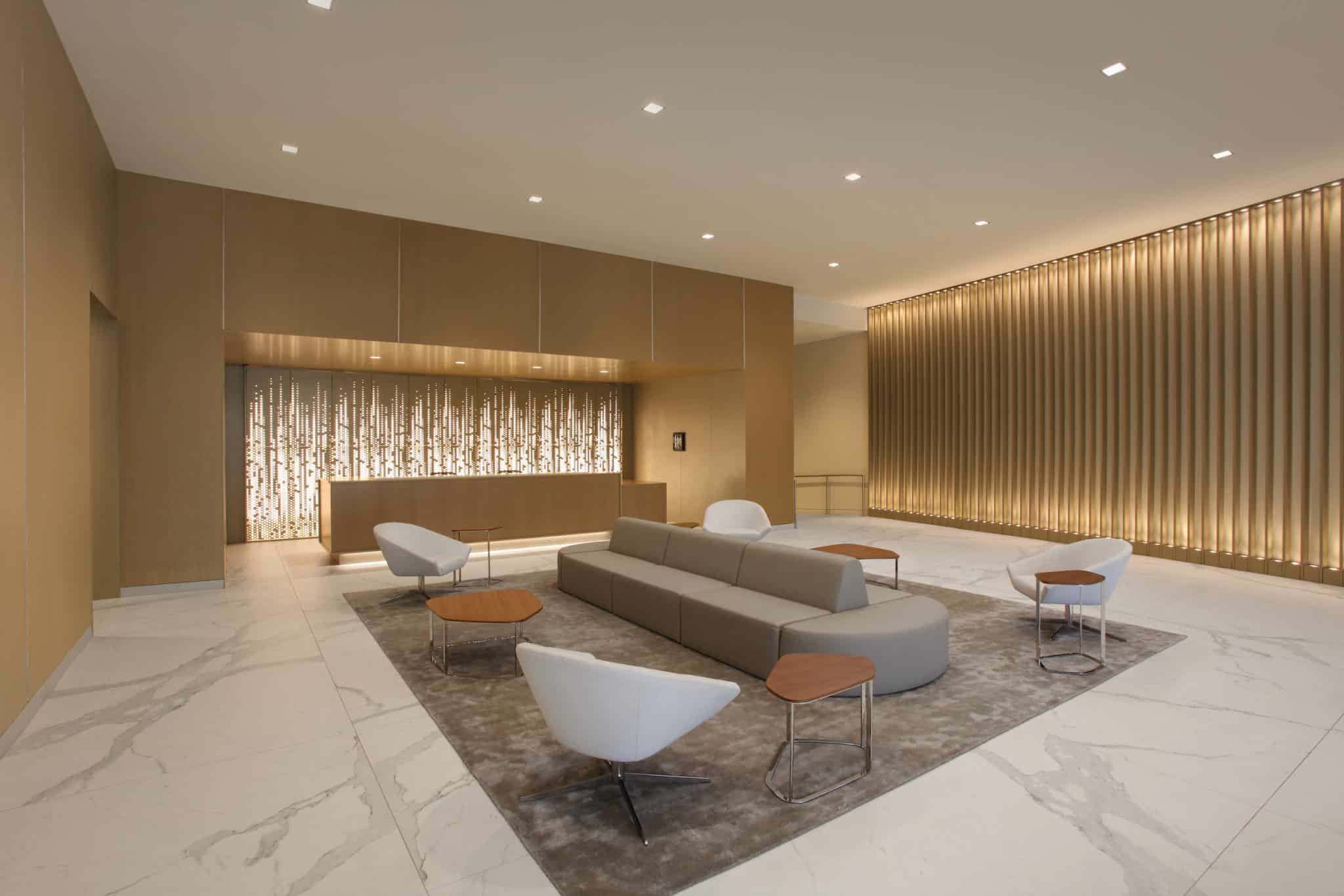 No market grows forever. Expecting real estate, whether residential or commercial, to appreciate indefinitely and without any correction is unrealistic. Every real estate operator should be proactively preparing for the next recession. Economic trends tell a story of cycles of expansion and recession, bull and bear, growth and depression. There will always be another recession on the horizon. Knowing when and how to prepare for it is critical to a successful long-term wealth-generation strategy.

Our approach here at Feldman is to remain ahead of the competition by leasing to smaller but creditworthy tenants. We provide such tenants with strong incentives to enter into long-term leases.  Every opportunity that we get, we lock into long-term fixed interest rates.  We keep our rents slightly below market in order to keep our buildings fully occupied, and always look to add value through creative renovations that make our buildings more competitive.  It’s an approach that we have learned to perfect through three generations and 100+ years in real estate and it has seen us through thick and thin. 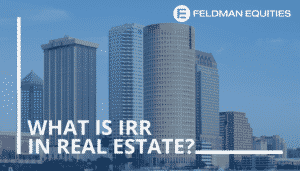 What is IRR in Real Estate?

When investing in an income-producing asset, it’s important to know how much money you will make as well as when you will receive it. 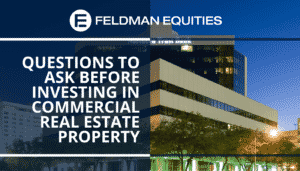 Questions to Ask Before Investing in a Commercial Real Estate Property 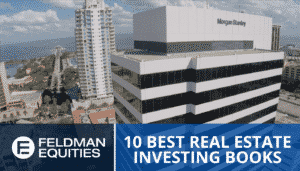 Many people are told that investing in commercial real estate is a great way to get ahead in life. And while that can be true, investing without direction can have the opposite effect.