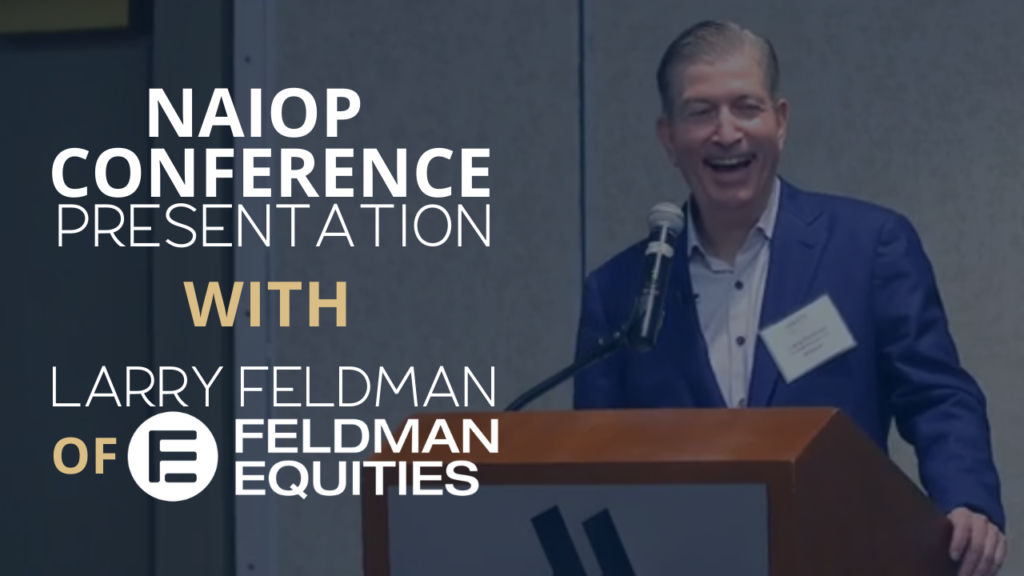 If you’re on the path to becoming or being a real estate developer in any market, you’ll want to watch this video. Why? Well, at the  2019 Annual NAIOP Tampa Bay Broker update, world-renowned office building real estate developer Larry Feldman of Feldman Equities was asked to speak. What followed was a thoughtful, deep exploration of some of the most important concepts in the industry. In this video, you’ll hear Larry discuss cap rates, investing, market variety, and so much more. This one’s a must-see developers.

From this video: Larry: Now there are some pockets of weakness. If you own a suburban building today, it’s interesting that cap rates are higher. Some of the outer suburbs have pockets of higher vacancy rates. Compare and contrast downtown St. Petersburg, where we are seeing the greatest move up in rental rates that I’ve experienced almost in a lifetime of doing office buildings.

Let’s see if this clicker is working. OK. So I’m getting sick and tired of this and perhaps some of you have experienced the same thing. I go to a cocktail party and they ask me what business are you in? And and I say, oh, I’m in the real estate business. And they look at me in a slight state of fear. And they say, aren’t you concerned that we’re coming to the end of the
cycle? And aren’t you worried about developing anything right now? And I’m kind of getting sick of this because I actually don’t believe we’re near the end. Now, I’ve lived through three cycles. I’m kind of one of the older guys in the room here. And I remember when the cycle was so bad that developers walked around with T-shirts that said, I will develop for food. The last cycle in 2009, I actually remember that I was cuddled up in the fetal position in my
bedroom.

But actually, I don’t believe we’re headed for a downturn anytime soon. And I actually am more optimistic. And let me just get into some of the specifics of Tampa Bay. Now I’m looking at this chart. Hopefully everybody can see it, if not, the bullet points are off to the right. So Ali mentioned there’s over a million square feet just beginning construction. Now, we’ve gone almost 10 years of expansion here with virtually no new construction, a couple of buildings here and there which mostly were built to suit. But we’re just in the infancy of new construction of what will be one point one million square feet delivered over the next two to three years in Tampa Bay. Now, the bulk of that square footage or the largest single chunk will be in downtown. But that 1.1 million square feet, you have to put it into perspective, is 1.1 million square feet out of a total base of 69 million square feet. That’s about 1.5, 1.6 percent of the total inventory. And if you look at absorption, we’ve been running at about 670,000. That’s 2010 through 2019. That’s our annual pace that we’ve been running at post-recession. So we’re talking about a year and a half of absorption over the next two to three years. That’s the supply that we’re dealing with. And then just to keep current with population and employment growth, we probably need somewhere between a half a million and a million square feet a year just to deal with the job growth that we’ve been having. So, no, I don’t believe we’re headed for any kind of overbuilding situation or bust in the office market.

Now there are some pockets of weakness. If you own a suburban building today, it’s interesting that cap rates are higher. Some of the outer suburbs have pockets of higher vacancy rates. Compare and contrast downtown St. Petersburg, where we are seeing the greatest move up in rental rates that I’ve experienced almost in a lifetime of doing office buildings. When I first got there, we were doing $19 deals. We’re doing now $32 deals and in
some of our higher floors, better. And we’re looking at vacancy is a 5 to 6 percent. But in some of the outer suburbs, you could be looking at softer pockets of vacancy. And on the investment side, we’re seeing cap rates significantly higher for suburban assets 7 or 8 percent. And that’s what creates the opportunity that Jim just mentioned. We did buy a project in Gateway. 473 bucks a foot, very nice, juicy cap rate of 7 percent, which given today’s interest rates, we financed it at 3.6 percent. It was quite profitable.

So just quickly touching on the condo market, we’re also in the infancy of delivery. Last year, we delivered about 400-500 luxury condo units to the Tampa Bay market. This compares and contrasts to Miami, where last year we had over 20,000 units delivered to the Miami market. Miami is a 6 million population we’re 3 million. We’re the number two city, of course, in the state. And yet our condo ratio is 50 to 1 in terms of delivery. There’s about a 2.7 month delivery absorption rate right now. What wee have in our inventory is an absorption rate of about 2.7 months. In Miami, we’re looking at 6 years. So I don’t see anything resembling an overbuild in the condo market. Now, kind of going zooming back out sort of nationally and internationally, an amazing, incredible thing is happening to debt worldwide. And that is that fifteen trillion dollars of debt has gone negative. So, for example, if you invest in a German bond, you are guaranteed to lose 5 percent of your investment over a 10 year hold. So what this is causing is a quest for yield, billions of dollars of funneling into U.S. real estate where cap rates are still quite juicy. So if you take that deal, we just put at a seven cap rate and you compare it to negative yields across Europe and parts of Asia. Now it looks quite juiced. Here is the 10 year Treasury when I left the office. The 10 year treasury was about one point six, seven percent, which is near the historical low for treasuries. But again, relative to worldwide, it’s actually quite high yield and quite attractive. So my wife was saying, well, what is interest rates? What are interest rates doing to cap rates?

And I mentioned to her, well, when we first got to Tampa, I was buying deals in 2009 and around a nine cap. And now that same building might be like a six cap. And she says, well, that doesn’t seem like much of a move. And so I had to kind of explain to her at a very basic way. And I actually did this little, little distraction for her. I said, well, if you had a 2 percent cap rate deal with a 10 million dollar in a why, that building would be worth five hundred million dollars.

But if that same building went to a 1 cap, it would be worth a billion dollars or one hundred times multiple. So what’s happening is as interest rates are dropping, cap rates are compressing and real estate prices are rising. But the good thing about Tampa Bay is we’re still below replacement cost. We can still buy a building like we just bought for $173 a square foot. That building costs $325 to replace. Now, where this is taking place in the on Wall Street, just to kind of give you an example, REIT prices just hit an all-time high this past week. And $93, that’s the ETF that represents all REITs. This is an all-time high. Rates have outperformed almost every segment on Wall Street. And it’s because of the underlying real estate that these REITs own and the caprates that are dropping because of interest rates. So I still think there’s room to run, particularly here in Tampa.

Just talk quickly about one of the buildings we just completed, which is Park Tower, as you know from the Bible, the lord said let there be light. That is one of our branding themes in all of our renovations. And you can see now this is the streetscape of the entire block front from Kennedy and Madison on Tampa Street. This is a building that we bought three years ago. And when we bought it, I was in front of a group of people and I said, I’m pleased to announce that we bought the ugliest building in Tampa. And it was I have to admit, we’re very proud of this renovation and that we have lit up Tampa, which is desperately needed. We need life and light in downtown. And that’s what you see now as you drive by in Tampa Street. This is the lobby. It went from being one of the uglier lobbies in downtown. I think it’s one of the best lobbies, bar none in downtown.

And that’s my presentation. So thank you very much. And thank you to the whole brokerage community for their help.

Check out the website for everything commercial real estate development: https://www.feldmanequities.com/