Here’s what a downtown St. Pete tower owner is doing to get tenants back in the office 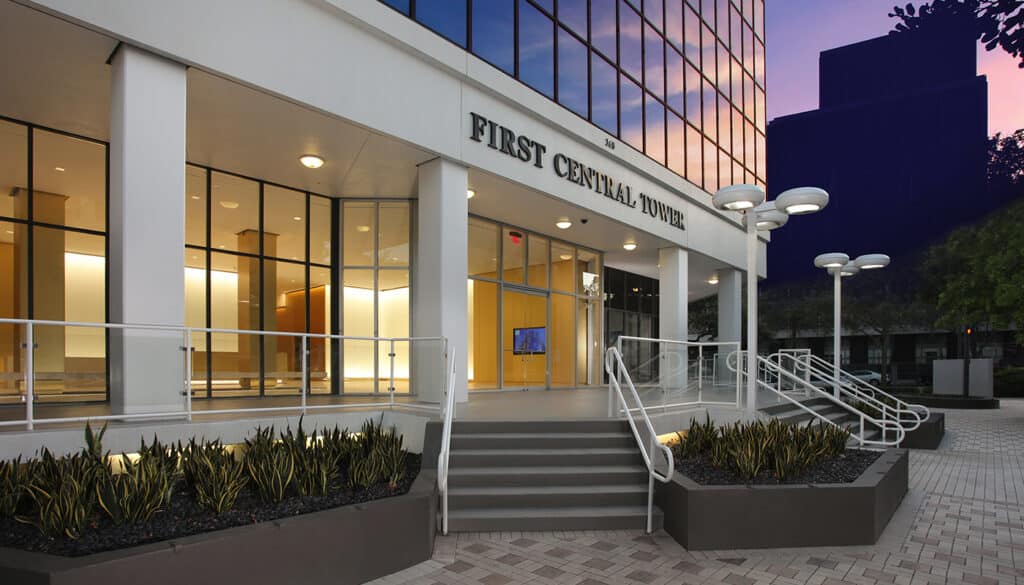 A study from Gensler Research Institute found only 12 percent of U.S. office workers at companies of 100 or more people want to work from home full-time. “I am seeing a clamoring of people who want to get back to the office. There’s no such thing as company culture on Zoom. It has to take place face-to-face."

Larry Feldman, president and CEO of Feldman Equities, has heard the speculation that the COVID-19 pandemic will dampen the demand for office space, as tenants shift to work from home strategies.

“I don’t believe office space is dead,” Feldman said on a Bisnow webinar earlier this week. “Human interaction is almost as basic a need as eating, sleeping or sex and these last two months have proven that … I believe people will return to the office.”

He cited a study from Gensler Research Institute that found only 12 percent of U.S. office workers at companies of 100 or more people want to work from home full-time.

“I am seeing a clamoring of people who want to get back to the office. There’s no such thing as company culture on Zoom. It has to take place face-to-face.”

The company has undertaken several initiatives so tenants feel comfortable returning to the office. Every building has an extra day porter, whose full-time job is to control the elevators, limiting the need for any worker or guest in the building to press an elevator button. There’s a limit of two people at any one time in each elevator to allow for social distancing. The company also is giving out masks.

“We’re dramatically increasing the amount of fresh air we’re delivering to the buildings and we’re putting in better filtration systems,” Feldman said. “We’re studying UV lighting, inserting high-intensity UV lighting into the ductwork and the air handlers that deliver fresh air into the space. So we’re increasing the amount of fresh air, we’re filtering it better and then we’re hitting it with UV light, which is about 99.99 percent effective in killing COVID … There’s also electro-static, to electrically charge the air to kill particles. We want to do all those things and get the word out to make people feel that it is safe to be in our buildings again.”

The Tampa-St. Petersburg area is poised to benefit as companies look to re-establish themselves in a post-COVID world, Feldman said.

“Companies are struggling to keep up profitability and survive. The first thing they do is look to cut expenses … We are hopeful that Tampa as a region will benefit as a low-cost option. We have one of the lowest costs of living in the country. Our office space typically rents at a median price of $30 a square foot, compared to rental rates in New York City of $120 per square foot for a typical Class A building. So we think there’s going to be an escape out of the higher priced areas, perhaps using COVID as an excuse.”

Ed Kobel, president and CEO of DeBartolo Development in Tampa, also was on the webinar and wasn’t quite as bullish.

“There’s certainly going to be a migration out of major cities like San Francisco, but I don’t think it’s a tsunami. I think it will be high net worth individuals moving on a tax basis like we saw what our president did, but I don’t think it’s huge, like in the hundreds of thousands,” Kobel said, adding that Florida and Tampa Bay’s strong economy, weather and water presence are a bigger driver for relocations.

DeBartolo Development’s portfolio includes retail, hotel, industrial and multi-family properties. The company is one of the largest taxpayers in St. Petersburg, through its stake in Tyrone Square owner Simon Property, but has been anticipating a correction in retail for the past couple of years, Kobel said.

“We decided a couple of years ago, even after being pioneers in the regional mall space, that retail was going to go through an enormous transition. We made a very strategic decision about four years ago to learn the industrial and ecommerce space. We’ve now got our first two buildings under construction in Chicago and Boston and a couple more in the development pipeline. We made a very big shift, rotating from retail to industrial,” Kobel said.

Feldman Equities sees the most opportunity in the urban core.

“What we are seeing in the Tampa Bay area is the densification of the downtowns, which are flourishing and prospering up, at least until COVID,” Feldman said. Downtown Tampa’s population has grown from 600 people 15 years ago to more than 10,000 people now. “In downtown St. Pete, where we have a number of office buildings, we’ve seen a tremendous surge in multifamily development which has brought thousands of younger people into the downtown, as well as downtown Tampa. The youth movement is creating the demand for office space in those two downtowns.”

“Across our portfolio, including in Tampa, we’ve moved more to a suburban, lower density product,” Kobel said. “I agree with everything Larry said. Densification is ongoing and we’ll probably see a doubling of that 10,000 people in downtown Tampa in four or five years. But from an investment thesis, we feel more comfortable with a lower price point, so nationwide we’ve shifted out of the urban core to a suburban workforce product — high quality, fully amenitized, but with a very different check-writing experience.