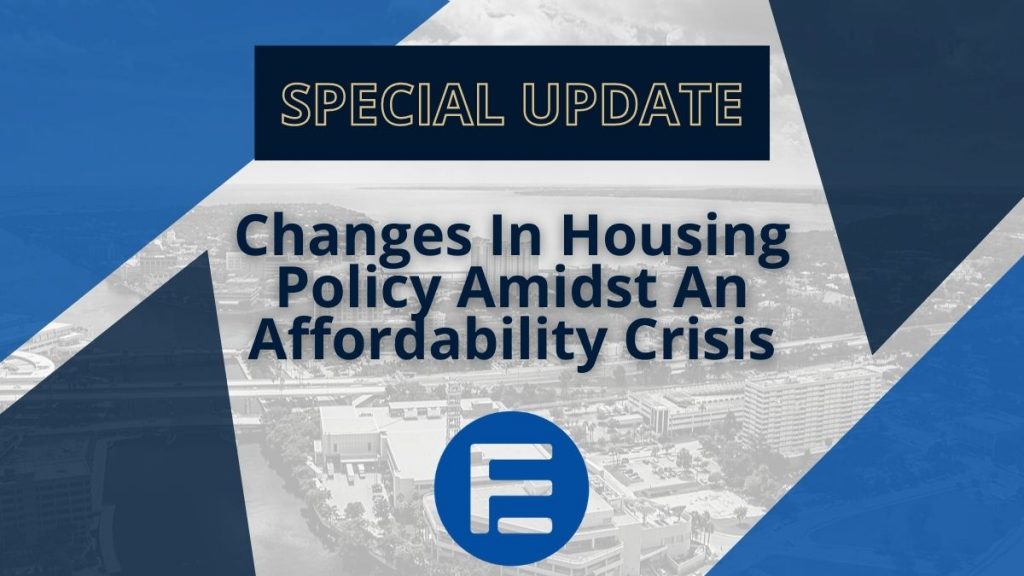 Real estate values across the country have continued to increase for the last 10 years, with median home prices roughly doubling, according to the Freddie Mac House Price Index (FMHPI). While many factors impact the FMHPI, increases and decreases in value can most simply be attributed to supply and demand  fluctuations. In August 2021, the median listing price for all active listings was $380,000, up 8.6 percent from August 2020.

What does this mean for the average population and how are federal and state housing policies being changed and implemented to address affordability concerns? A growing real estate market is great for investors and for people who already own a home. However, for those wanting to purchase their first home, or those struggling to make ends meet, increasing home prices present a major roadblock. Many people are turning away from homeownership, opting to rent long-term instead. The homeownership rate has dipped from an all-time high of 70% in the mid-2000s to 65% in late 2020.Unfortunately, an increase in rental demand often means an increase in the cost of renting, sometimes pricing people out of the rental market.

High costs in the United States extend far beyond housing and into medical, education, and childcare, but housing is likely the area we feel the squeeze the most. Americans spend more on housing than any other expense category. Along with other factors, rising costs have created an economy with a very “fragile” population, according to the National Endowment for Financial Education (NEFE). Approximately 1 in 5 people are unable to completely pay their bills each month, and 2 out of every 5 people would not be able to come up with $400 in case of an emergency. Healthcare costs have skyrocketed and, even with health insurance, the out-of-pocket maximum for most coverages is several thousand dollars. Home prices and rental rates have outpaced wages for a while, leaving people paying more today for the same goods and services.

In stark contrast to the housing crisis in 2008, the affordability crisis today is due to a shortage of housing available for purchase and rent. According to a study done by the National Association of Realtors, “Housing Is Critical Infrastructure: Social and Economic Benefits of Building More Housing,” there is a deficit in housing inventory of between 5 million and 6.8 million units (single-family, townhomes, condos, and rental units).

Homeownership has long been thought of as one of the preeminent wealth creation tools at our disposal. However, if young Americans have been priced out of the market and aren’t able to take advantage of this tool, they are also missing out on what could be generational wealth for their family. Public policymakers at the local, state, and federal levels have made it a priority to shift the tides and create a more affordable housing situation for millions of Americans. At each level of government, proposed policies are aimed at overcoming some of the hurdles people face when renting or buying a home.

Coming in the form of a tax credit, some of the policies focus on down payment assistance for first-time buyers, while others are more focused on providing cheap capital for investors looking to buy and renovate or build affordable housing, or on making funding available to local and state governments to increase housing supply by making the development process easier. For many first-time homebuyers, saving for the down-payment is the hardest part. Once the home is purchased, making mortgage payments is like paying rent, and often a mortgage payment is less than rent would be on a comparable home. State and local governments have also implemented up-zoning in single-family zoned neighborhoods to allow for small multifamily construction, especially around downtown cores. According to the Urban Land Institute, completions of these types of “missing middle” housing have dropped 75% over the past few decades.

The Impact of Housing Affordability on Urbanization

In California, Gov. Gavin Newsom has recently signed two bills related to the housing affordability crisis. The first, Senate Bill 9 is meant to increase density in most neighborhoods across the state.Senate Bill 10 lessens the environmental regulations for multifamily housing, making it cheaper for developers to build multifamily facilities, adding high-density areas where they didn’t exist before.

Similar bills are being considered across the country, and will likely have an impact on urbanization and the way city centers look, feel, and operate. When talking about an urban area, we are referring to areas where human structures are dense; an area that could be anywhere, such as suburbs, inner cities, or towns. As municipalities allow more dense development, more urban areas could develop.  This trend will create a greater demand for urban workplaces, potentially driving worker productivity because employee’s homes will be closer to their workplace and because of the “agglomeration effects” associated with urbanization. Theoretically, if workers spend less time commuting to their office, they will have more time to put towards being more productive members of the workforce.

Providing housing that is more affordable to consumers is a win on all fronts as this is a crisis we have the power to correct. However, it’s important to keep an eye on the political climate in an area as it undergoes changes towards urbanization. When cities go through a substantial change like urbanization, there is always the potential for an uncertain political climate. As more people migrate to densely populated areas and the local political demographics shift, tensions between growth and preservation advocates can erupt. We see this nationwide in the NIMBY (Not In My Backyard) and YIMBY (Yes In My Backyard) movements.

Proposed changes to current housing policies across America are aimed at providing more affordable housing opportunities to those who need help. And at a time when home values and rental rates have been increasing for an extended period, the changes are a welcome sight. The policies, both proposed and currently in place, are necessary for millions of Americans to have a safe, warm, and dry place to live. Urbanization could be a result of several policies and economic trends as municipalities make changes to zoning and density regulations. In a densely populated state like California, urbanization could be a major catalyst for growing the number of homes available.